Are Front-Facing Dash Cams Worth It? [A Driver’s Perspective]

David has been truck driving for more than 40 years. He's currently a company driver with ATS in the vans division.

Do you feel like Big Brother is watching you with the front-facing camera in your truck?

As a truck driver myself, I can understand where you’re coming from. You don’t want to feel like every move you’re making out on the road is being watched and scrutinized.

On the other hand, you might realize that one day the camera could be helpful if you get into an accident.

When you understand how the front-facing cameras work, you understand that they’re not put into place so your trucking company can watch every move you make; they’re put in place to help keep you safe and protect you from taking on liability for accidents you didn’t cause.

Take it from me, a driver who was skeptical about the camera at first but took some time to learn how it worked and quickly learned how beneficial it is. Not only does my dash cam improve my skills as a driver, but it also protects me out on the road.

I’ve been truck driving for more than 40 years and I’ve spent the last year and a half as a company driver with the Anderson Trucking Service (ATS) vans division. Not only am I familiar with how the cameras work from the driver’s side, but I’ve also spent time on the other side of things reviewing dash camera footage.

In this article, I’ll help you learn a little more about how front-facing cameras work and how they can help you become a better driver.

How Does a Dash Cam Work?

First thing’s first: Let’s talk a little bit about how the cameras work. I had a personal camera in my truck before I joined the Anderson Trucking Service (ATS) team, but now there’s a front-facing Lytx camera in my truck. Most cameras work very similarly, so unless otherwise stated, the information below should ring true for most front-facing cameras your company may have installed in your truck.

It can take some time to understand how the cameras work; there’s a bit of a learning curve.

Dash cams record continuous footage to provide reliable video evidence. Despite recording continuously, the cameras can only store footage for a set number of hours. The Lytx cameras, specifically, can only hold 100 hours of footage. Anything recorded 101 or 102 hours ago is lost.

Front-facing cameras have a wide-angle lens so that they capture exactly what you, the driver, see on the road in front of you. With low-light visibility, they can even capture great footage at night.

What Triggers an Event on a Forward-Facing Dash Cam?

Despite the fact that the cameras are always recording, they’re only triggered to send footage to your trucking company when certain events occur or when an accident happens.

If the dash cam detects any of these behaviors, a video snippet is sent to your trucking company. The snippet includes information a few seconds before and after the event, so your trucking company will usually have about 12 seconds of footage to view. When an event is triggered, you’ll see a red flashing light.

If you’re involved in an accident, trucking companies may view five minutes of footage.

Depending on which trucking company you work for, different risky driving behaviors will be monitored. Ultimately, the dash cam is triggered when you’re making risky maneuvers. The camera is an effective safety tool because it helps you learn to recognize those risky driving habits and correct them.

Understanding how the camera works can be tough for a driver at first. I had my fair share of moments where I had no idea what was triggering the camera. I was scared to hit a marked line or change lanes for fear that I’d trigger an event.

You’re provided paperwork about the camera when it’s given to you, but it can be overwhelming, especially if you receive the camera during orientation and you’re already on information overload. Learning how it worked wasn’t my top priority.

There’s a lot to keep track of on the road, and when I first got it, the dash cam felt like one more thing to keep track of. I was anxious at first. Ultimately, once I understood it, it made me a better driver. I no longer feel nervous and I have far fewer events.

If you don’t understand what triggers the camera, talk to your company and your safety team. Every company will track different events so it’s important that you have a good understanding of what they’re paying attention to. Be sure you understand exactly how the camera works and what’s being recorded.

You can’t improve your safety score without understanding what you may be doing wrong. When you notice an event is triggered, note what you did and what you experienced. That way, when you speak to the safety team about the event, you can explain your side of things and talk through the event to understand what you could have done.

The Benefits of Front-Facing Cameras

Ultimately, I believe the front-facing dash camera is an infinitely useful tool.

The two primary benefits of front-facing cameras are safety and protection during accidents.

Because the camera triggers an event when you engage in a driving behavior it identifies as risky, it encourages you to break that habit in exchange for safer driving behaviors.

As truck drivers, we’re used to personal vehicles not following the rules of the road. There are compact cars and SUVs much smaller than our trucks weaving in and out of traffic — cutting us off left and right. It’s probably not something that’ll ever change. So, in turn, we have to adjust our behaviors.

In fact, I’d say about 20 times per day on a realistic day a driver pulls in front of me and then proceeds to match my speed. This often triggers an event because the camera thinks I’m following too closely. It can be incredibly frustrating.

In my experience, I've learned “tricks” to avoid events, which is really just me learning how to implement safer driving techniques. When someone pulls in front of me, I tap my brakes to take off adaptive cruise control. After 2.6 seconds, I re-engage cruise control. I don’t lose momentum and I don’t trigger an event because I maintain a safe distance of three seconds between my truck and the driver in front of me.

I also minimize my exposure to hazards. I let drivers merge in, I try to run in clean air as much as possible and I keep my speed slower than the flow of traffic. That way I maintain a safe following distance and stay away from drivers who are distracted.

When you pick the safest area to operate in and give yourself space, you’re far less likely to trigger an event due to lane departures without signaling, speeding or hard braking. Letting the traffic on the road cruise in front of you is a comfortable way to drive safer and minimize your incidents on the road.

It’s also a great way to get out of the go-go-go mindset that so many drivers have. That mindset can get you in trouble. It can stress you out and make you engage in unsafe driving behaviors. 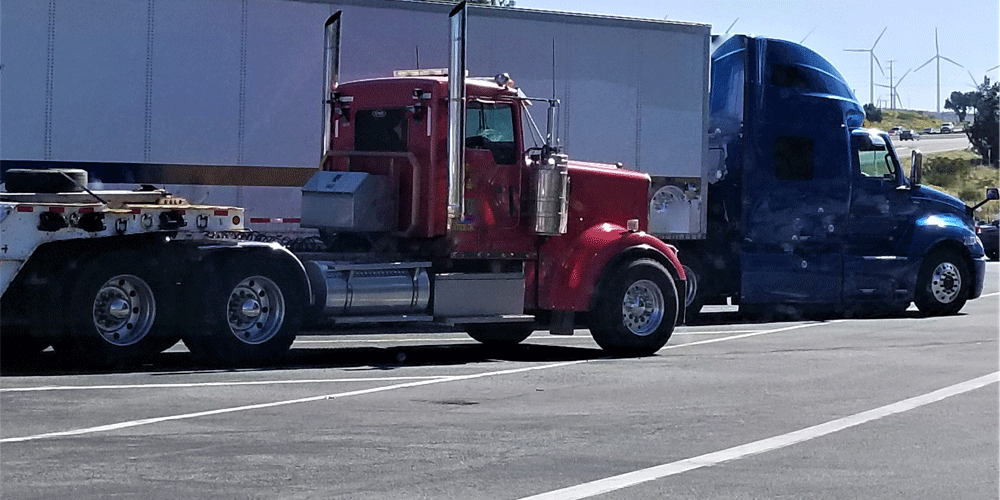 Let’s put it this way: The first cell phones came out in 1983. They were nothing like they are today. They were heavy and bulky. People were upset about them; there was a lot of uneasiness because people were worried about the government using phones to track and monitor them. But the thing is, the phones came in handy when you needed to call 911 in an emergency. The phones seemed like a bad idea until they were useful. And nowadays, everyone loves them.

The front-facing dash cameras are the same way. It’s like insurance. You pay for it and hope you never have to use it, but if you do, you’re happy you paid the premiums all those years.

Years ago, I used to drive heavy tow trucks. I got called to an accident very early in the morning before the sun had risen. There was a flattened pick-up truck in the median and the driver had passed away. The truck had been hit by a semi. It looked bad for the driver of the semi. Thankfully, the semi-truck driver had a personal camera. The cops viewed the footage and were able to determine that the truck driver wasn’t at fault. The driver of the pick-up truck had wrecked before the semi came down the highway. That footage exonerated the truck driver from vehicular homicide.

That’s certainly an extreme example, but it’s a relevant example nonetheless. I’ve talked to countless drivers who’ve been involved in minor accidents that weren’t their fault. It wasn’t until the camera footage was reviewed that the drivers were exonerated because it was actually the other driver’s fault. In these instances, a DOT accident can be overturned and listed as a non-preventable accident.

The Cons of Front-Facing Cameras

Of course, the cameras aren’t without their cons.

There are some situations where it’s nearly impossible to avoid triggering an event, and that can be frustrating. For instance, I’ve been exiting the highway and there’s a very short inclined ramp leading to the stop sign. I braked heavily while downshifting and I used my exhaust brake. I stopped in time, but it triggered an event.

I’ve also had drivers pull in front of me and enter my safety zone. Because they’re within a three-second following distance, it triggers an event. To the camera, it might look like I just quickly pulled up on someone, when in reality they cut me off.

Sometimes you just can’t prevent an event from being triggered. That’s why it’s important to note every time you have an event. What happened? How did you react? What could you have done differently? Could you have anticipated the event? You’ll be able to talk through the event with your safety department and ask them questions.

Talking about triggered events with your safety team isn’t always the most comfortable thing. It’s important to remember, above all, that the safety team is there to help you improve and stay safe out on the road. Keep an open mind.

As with anything, there are pros and cons to front-facing dash cams. It can be frustrating to feel like someone’s watching you, but the cameras are actually helping you.

The dash cams can help you learn more about your driving behaviors and reprogram yourself to be a safer driver, even if you always thought you were doing everything the right way. Ultimately, I’m happy I have the camera in the truck because it’s a reliable witness if I would ever become involved in an accident.

A lot of drivers have a lot of animosity toward the camera, but you have to be open-minded about it. Just like the cell phone was, they’re the way of the future.

Learning more about how the dash cam works specifically can provide you some peace of mind.